This story is another in the series of stories that have arisen because of the Hirst Decision and about the reaction to that decision of local entities.

Some of the Stories that the Fourth Corner have provided are Lummi Nation Needs City of Bellingham Water.

And this one by Tribal Leader Tim Bellew…Lummi Leader says NO to Hirst Fix.

No lack of Water in the City of Bellingham.

City of Bellingham gives Lummi Tribal Sewer and Water District … 35,000 gallons a week for their construction project in the city limits of Ferndale.

“Met with the Mayor about this issue today.   She agreed that we could provide the Lummi with construction water up to the amount we are flushing without charging them.

I also called Ferndale to let them know about the Lummi request and to see if they had any issue since the construction is actually within the Ferndale limits.   Ferndale was fine with it, in fact it is their preference that Lummi get the construction water from us, they are having some supply issues right now.” The rest of this part of the e-mail chain is here.

There was an unexpected increase in the water usage and the resulting billing at the beginning of this agreement and this caused the following exchange with the Lummi Tribal Sewer and Water District.

From the Finance Department of the City of Bellingham:

“The first bill for the Lummi Tribal Water District agreement was for $24,724.83 – which was 5935 units of water consumption.  The bill was paid but the check came back with a “stop payment” today.  Their first bill credit of 80 units ($301.60) was based off of pro-rated amount provided by the meter reading group. Going forward they will get the credit for 374 units per cycle as I understand it.

The receipt will be voided today.  Please let me know if any billing changes need to be made and how to proceed with the outstanding balance.”

Included in this e-mail was the following usage data chart: 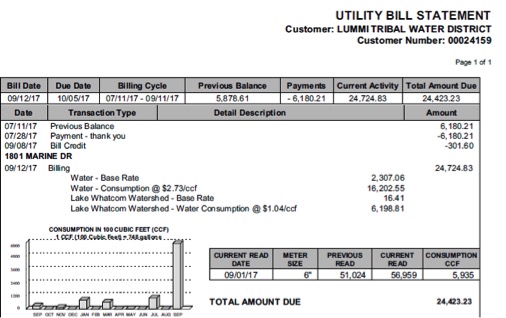 As time went on there were other back and forth e-mails on billing stretching into 2018.

The Complete E-mail exchange on this subject starts from the “newest” email and ends with the “oldest” and is available here.

In conclusion by the time of a report obtained on February 27th shows a zero balance.

Here are some thoughts for our readers to make comment:

The 35000 gallons per week would allow 500wells at 100 gallons a day to be built in Northern Whatcom County.

The increased usage is an indication also that the Water Management for the new project on Slater Road.