City closes City Hall and Library to all business!! 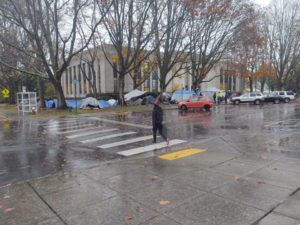 public and employees for this week, out of an abundance of caution for the safety of all — campers, volunteers, City employees and members of the public. Those with City business to conduct during this week should contact the relevant department by telephone or email using information provided on the All City Contacts page.”

EDITOR’S Note: Is there light at the end of the tunnel as far as events in downtown Bellingham?  We certainly hope so… Having a CHAZ here in Bellingham as it was in Seattle cannot be what our civic leaders really want.  But the editor understands that the left leaning office holders and media do not want to get too carried away with really blaming Antifa and other leftist extremist for anything bad in their City and County.  It is always the way with those in power.  But we do see signs of hope at least that the problem of homelessness and drug addiction will finally be handled with sensible solutions and not the grand standing of having tents and violence in the front yard of city hall.  There are many homeless in the Central part of cities around the country who need real help and attention and they should not be used as political pawns to beat up on one side or the other politically.

From the City of Belliingham Web Site 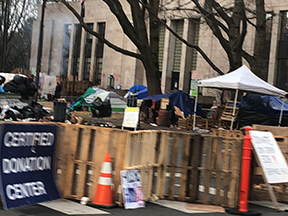 A tent encampment began on the lawn in front of City Hall in mid-November, later expanding to the north lawn of the Central Library. Many people who are living unsheltered are staying at the encampment, aided by a group working as a collective to assist campers with food and other necessities and to bring attention to the needs of those who are unsheltered.

The situation is complex, challenging and dynamic. We are actively engaged in the urgent work of creating the conditions to end the encampment, with the safety of all – campers, volunteers, City employees, and members of the public – of paramount concern. The City is continually working, along with Whatcom County and other partners, on short- and long-term solutions to providing safe shelter for those experiencing homelessness. 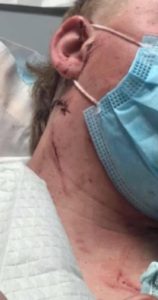 No arrests yet in an attack on a driver in a passing car Friday night as the area gets even  more dangerous. He ended up in the hospital with a “serious” injury to the neck. Bellingham Herald Report Here…

Multiple people were attacked near an encampment at City Hall. Victims were rushed to the ER and one victim sustained major bodily injuries. A suspected hatchet was involved in the assaults and a handgun was brandished.

There are 10 more “police Activity” Reports here for January 22nd in the City Hall area.

A comment on the Fourth Corner article of January 23rd revealed the following….

This is from a commenter on the Fourth Corner Web Site “Did you see this post today?”:

“Last night, I got a call from my son that he and his friend were jumped by 4/6 homeless people living in the homeless camp at the Bellingham City Hall/Public Library! My son’s friend was driving by and had someone throw a skateboard at his car. He got out, and was attacked by someone with a hatchet. He suffered head, neck and facial injuries. Once my son saw his friend getting jumped he went to fighting off these people to help his friend. He was attacked by several people, a woman with a baseball bat. He was able to knock the hatchet out of the guys hand. He has a broken nose, a concussion & bumps & bruises. To say I’m outraged is a complete understatement…. Read the Rest here

Bellingham Metro News calls for the resignation of Mayor Fleetwood: 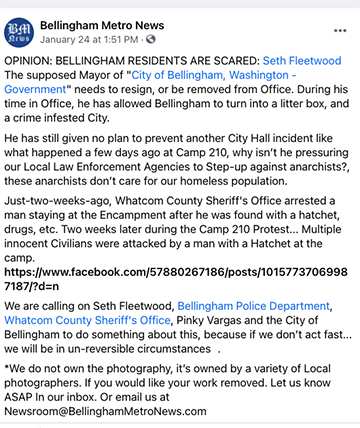 An individual involved in local government wondered why there was “No mention of “left wing extremists, Antifa, or BLM” in Satpal’s message…..” 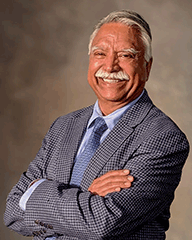 took place in front of City Hall, and I want to reiterate this directly to you today as well.  I have repeatedly communicated to Mayor Fleetwood that my administration is ready to assist the City in its efforts to move the campers into existing shelters and end the encampment at City Hall. I look forward to the City of Bellingham making some decisions soon to restore order.

The harassment and destruction of public property by these extremists, and overall threat to the public, including County and City employees, is unacceptable. The safety of the public and County employees is a primary concern for me. No one coming to the Courthouse for services or work should have to be concerned about their physical well-being.

Please know that the Sheriff’s office is ready and prepared to deal with any threats on County property or to County employees. Our Facilities team is also monitoring the situation closely and taking extra security measures to ensure your safety.

None of us are unsympathetic to the plight of those experiencing homelessness, but the suggestion by some that we are not providing shelter and services is completely unfounded. During the past week, 90-100 beds have been available each night. That number is sufficient to provide shelter to all the people camping at City Hall.

Thank you for your work and the essential services that you provide.  Stay safe and vigilant.