Ballot title court fight sustains AG Ferguson not informing voters! A Carbon Tax by any other name is Still a Carbon Tax 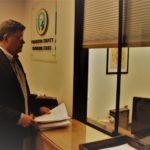 NOTE: Glen Morgan is one half of the FULL CONTACT ACTIVISM TOUR that begins May 10th. (See Flyer below for details)

An Initiative Measure (No. 1631) was filed March 13th with the Secratary of State’s office and may be on the ballot this fall if it gets enough signatures by July 1st.

The Ballot Title and statements are below

“BALLOT TITLE
Statement of Subject: Initiative Measure No. 1631 concerns pollution.
Concise Description: This measure would charge “pollution fees” on sources of greenhouse gas pollutants and use the revenue to reduce pollution, promote renewable energy, and address climate change impacts, under oversight of a public board.
Should this measure be enacted into law? Yes [ ] No”

“Excerpt from the Initiative”:

“The department of revenue is authorized to create sub-funds or sub-accounts as may be necessary or appropriate to implement the purposes of this chapter. Receipts collected from the pollution fee imposed by this chapter may only be spent after appropriation into the clean up pollution fund.” 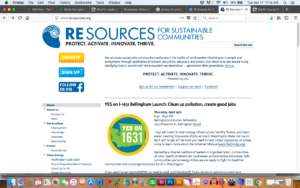 As a matter of fact, well known environmental Non Profit RE-Sources for Sustainable Communities from Bellingham Washington has taken this issue on and is recruiting volunteers to gather signatures for this “fee based on Carbon” Initiative.

Sources tell the Fourth Corner that volunteers briefed to collect signatures are stating that “those backing this effort will be spending $1,000,000.00 to collect signatures and $10 Million for the Yes campaign on this new tax in the Fall.” This tax is estimated to conservatively bring over 5 Billion Dollars to the State Coffers over the next 10 years.

Glen Morgan’s “We The Governed” Gets Involved

Public Disclosure Commission Activist Glen Morgan decided, like many other observers, that this initiative was really about a new tax and took on the Attorney General’s assignment of the innocuous ballot title and concise statement to court in Thurston County on March 27th.
The petition to the Court is here.
The draft of the petition is here.
The full title and summary from the AG’s office here 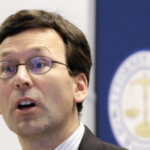 The Thurston County Judge listening to the case, decided, April 6th, 2018 that the Attorney General’s unclear Title and description would stand and the People’s right to understand that the initiative is about a new tax would be clouded by the ballot title and statement.

***The Fourth Corner has found that non-profits can be involved in signature gathering (this is considered “lobbying” by the 501C3 Federal Statues and a certain percentage of non profit activity can be expended for this). But they may not be involved in the campaign until the item hits the ballot and MUST file Public Disclosure Reports as any other PAC does.

Here’s an article from the Fourth Corner on this subject concerning RE-Sources.