Dick Donahue on the Election: 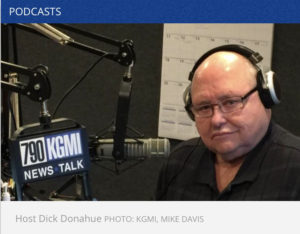 Yesterday, I was talking to a local attorney and was asked what I was going to say last weekend about the election.  At the time, I said I wasn’t sure if I would say anything.  But, if you love America as I do, you can’t remain silent.

Donald Trump was elected because he wanted to drain the swamp.  But, once in Washington DC the swamp rats came after him.  You had the impeachment on false charges by the opposition party, the Rhino Republicans, The US Chamber of Commerce, The liberal press, etc.

Big Business did not like the outsider, who while he had started in business with a million $ from his father grew up battling the NY Mafia. And in the process becoming a Billionaire.  And I admit that some of the personality traits that the Donald exhibited from growing up that way did not always go over very well.  But, the swamp rats did not like someone who wouldn’t play by their rules.

And when he took on China, he crossed the line.  Big Business was making too much money using cheap Chinese labor to pad their pockets, get big performance bonuses, etc.  Apple, Walmart, Costco, Amazon, Bloomberg, Google and many more have lined their pockets at the expense of the American worker.  And while the military/industrial complex feasted off of the money spent to reestablish our military, they did not like the President that did not want to get us in meaningless wars.

IT IS REALLY TOUGH WHEN YOU LOVE AMERICA!

Family will always be important. Dick has been married to Fontene since 1983 and they share a blended family of five kids, grandkids and great grandkids. And because of the continued encroachment by government on our personal and professional lives, being involved in local political activities to protect our future is a high priority.

He also hosts: Wealth Wake up on KGMI Saturdays from 11am – Noon and Sundays from 9 – 10am