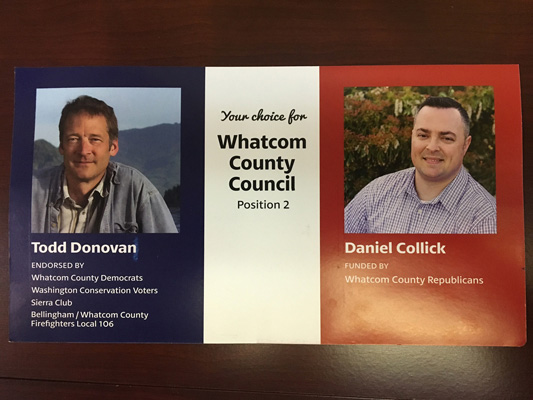 In an attempt to further his chances of going on to the November election by being one of the top two in the 2nd County Council District Race; Todd Donovan has sent out a campaign mailer featuring candidate Todd Donovan and candidate Daniel Collick sharing one side of the mailer.  Todd Donovan completely ignores the other hard running progressive candidate in the race: Amy Glasser who has been working in the district.

Obviously Todd Donovan is in fear of the Amy Glasser campaign

Todd Donovan is concerned the Glasser campaign will win a top two position since the left’s  political speculation is that Daniel Collick will move on the the General and be one of the top two.  Amy Glasser has been a candidate for the 2nd since December and has continued efforts since that time.  Donovan on the other hand declared at the last day of filing for the office reflecting what could be a deep split in the traditional Democratic vote and the Bernie Sanders Vote.

Donovan doesn’t need to win to continue serving on the Council… he has two more years on his At-Large Term.

In a quirky set up hatched by Todd Donovan, Lisa McShane, the County Council and Prosecuting attorney Karen Frakes in the 2015 election and the resulting 5 district vote; Todd Donovan still has 2 years to serve on his at-large office and getting elected here would extend his presence on the Council an additional two years.

Here is the Fourth Corner link to District Two candidates 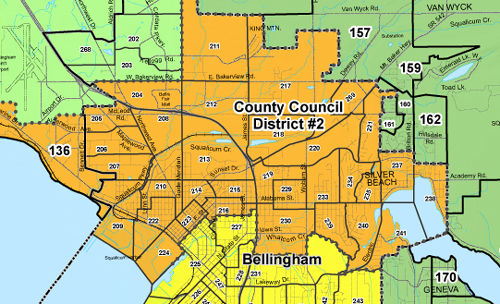 If Donovan was elected in the primary  it would also mean that a very liberal Council would have to replace the Council At Large position by appointing a new member to replace Donovan’s “Current position”.  Do you think that newly appointed person would represent all of us or just the special interest represented by Washington Conservation Voters (Tom Steyer money) and the Tribes that stopped Democrats in the State House from even voting on the Hirst Fix?

So Todd Donovan has a “free bite at the apple” referring to the fact that he cannot be removed from the Council by losing this election.  Voters should be aware of this.

The 2015 Expose’ on how Todd Donovan worked with Lisa Mcshane and RE-Sources to get the 5 districts on the ballot and How each office was allocated to have the left hold on to power longer follows.

Part one of Charter Review Expose 2015

The result of the election surprised many NOT in the results so much but in who would and would not be served if the new scheme past.

2015 election and the transition language have brought about the following “reassignments” of current Council Members.

1.Karl Weimer represents the Foothills New District 3 while living in New District 4.  No matter what happens  Karl Weimer will not serve as an elected  County Councilperson in 2017.

2. Ken Mann represents the New District 2 and does in fact live in New District 2 but is not running this year; Ken Mann will not serve as an elected County Councilperson in 2017.

3. Todd Donovan after being elected to District 1 in the OLD setup magically became a Councilperson at large after the 2015 5-District election. He had a choice to finish out his at-large term OR run in the new District 2. If he loses his District 2 Race he still serves 2 more years as Council at Large. He is currently running against Daniel Collick and Amy Glasser in the North Bellingham District.

4. Barry Buchanan magically became the New District One Council person after the 5-District election in 2015 and now is running for Council At Large. He is running against Mary Kay Robinson for the New At-Large position.

5. Rud Browne decided to leave his NEW  at large position and is running in the NEW District one of South Bellingham against Phil Morgan.

6. Meanwhile Satpal Sidhu is not running this year and represents the new Farm District(4) even though he lives in the Foothills District(3).  He has two more years to serve.

A lot more liberal, leftist magic can occur as a result of this election… For example if Todd Donovan wins… the new Council will have to vote to replace him in his current at large position.  Who might be selected?? Well look at the list above. Karl Weimer, Ken Mann, Rudd Browne (if he loses) or Barry Buchanan (if he loses).  Thus giving someone an incumbent place on the ballot and retaining Leftist Control of the county council.

Thanks to Delaine Clizbe and Chet Dow for their contributions to this report.