Summary of Supreme Court Decisions a Story of “Balance of Power” 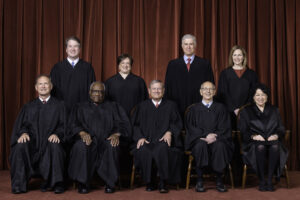 Let Freedom ring as the Supreme Court does its duty:

In date order here are 6 decisions that will have an future effect on our Government.

The court ruled Maine must include religious schools in a state tuition program or else violate the First Amendment. Speaking for the majority, Chief Justice John Roberts said states aren’t required to support religious education, but those that “choose to subsidize private schools … may not discriminate against religious ones”.

By a vote of 6-3 on June 23, the Supreme Court ruled that people have the right to carry

weapons in public for self-defense. At the center of the case was a New York state law requiring concealed carry permit applicants to prove they had a “special need” for a permit exceeding just basic self-defense. State gun owners then sued, arguing that such a provision made it nearly impossible to obtain a concealed carry license.

In a 6-3 ruling on June 24, the Supreme Court overturned its landmark 1973 Roe v. Wade decision, saying the U.S. Constitution does not guarantee the right to have an abortion.

The court was once again split on ideological lines in Kennedy v. Bremerton School District, ruling in favor of former high school football Joseph Kennedy, “who was suspended then not rehired after leading postgame prayers on the 50-yard line,” The 6-3 ruling earlier this week dealt a blow to the Biden administration’s plan to fight climate change but has implications beyond environmental policy.

Conservatives, however, see the ruling as a victory for separation of powers and curbing federal agencies’ power to make regulations not authorized by Congress.

In a rare victory for the Biden administration, a divided Supreme Court voted 5-4 on June 30 to allow the administration to end a Trump era immigration policy known as “Remain in Mexico.”