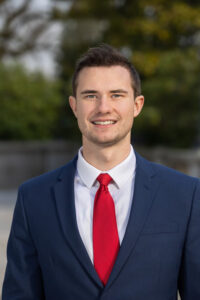 “I’ve already shown an ability to work in a bipartisan fashion to advocate for the interests of the 42nd District. For example, I’m pushing for financial relief to agricultural producers harmed by the recent flooding.  I have spent every day in this legislative session defending the interests of Whatcom County.”

“People of my generation love our community, but they know that it is getting more and more difficult to buy a home, find a job or raise a family. If we want to preserve the beauty and potential of Whatcom County and surrounding areas, we cannot solve our challenges by over-regulating, overspending and overtaxing. Our public safety crisis will not disappear if we stick our heads in the sand and pretend it doesn’t exist. People will not see gas, food and housing become more affordable if we don’t fight the majority’s proposals that nickel-and-dime them into hardship. But we will continue to see trust in state government erode if we don’t fight for emergency power reform.”

“Senator Sefzik has already shown himself to be a strong fighter for Washington taxpayers.” Senate Minority Leader 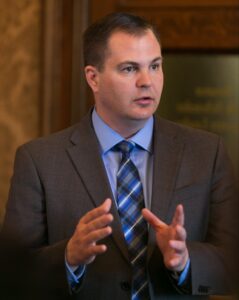 John Braun remarked. “Senator Sefzik brings a unique underserved voice and experience to Olympia; he is very diligent in his understanding of the measures put before him and he always puts the voters of Whatcom first. Simon has already established important relationships that will make him a strong advocate for his constituents. I hope voters in the 42nd District give him a chance to build on this positive momentum. It’s critical we keep him in the seat.”

Former State Representative Luanne Van Werven (R-42) shared her support of Sen. Sefzik by endorsing him as well: “It’s refreshing to see someone so young, smart, and dedicated to serving the people of Whatcom County.” said Van Werven. “Simon has been busy every minute because he takes his appointment very seriously. His duty to us is always at the forefront of his mind and his fellow legislators have really embraced him. Seeing the next generation of leaders enter public service is exciting! Simon has many years ahead of him to fight for us. Electing him to retain his seat is the best investment for our future. Senator Sefzik represents the true spirit of Whatcom; I knew someone else that had his same moxie—and his name was Senator Doug Ericksen.”

Senator Simon Sefzik, of Ferndale, grew up in Whatcom County and is proud to represent the hardworking people of the 42nd Legislative District. He graduated with honors from Patrick Henry College in Purcellville, Virginia, where he earned his Bachelor of Arts in American Politics and Policy Studies. His interest in government led him to intern for the U.S. House of Representatives and the White House Coronavirus Task Force, and to a full-time staff position with the White House Management Office. Following his time at the White House he also worked in the private sector for a healthcare company.

From the Fourth Corner NOTE:

Anyone serving in the legislature, including Senator Sefzik, cannot raise campaign funds until the end of the session now scheduled for March 17th … the Council delay in selecting Sefzik has barred him from collecting or raising funds the week before his oath of office when the vote to replace Sen Ericksen was scheduled to take place.