Senate Democrat Leader Fails in getting ruling to stop Senator Sefzik Speech on the Floor of State Senate.

On Wednesday February 15th Senator Simon Sefzik of the 42nd District stood up to speak for an amendment to Senate Bill 5909.  The Bill was brought forth to rein in the Governor’s powers during an emergency.  Senator Sefzik was speaking in favor of an amendment to make the bill even stronger and was called to task by the Leader of the Democrats Andy Billig of Spokane for what Sen Billig thought was a dispersion of our Governor.  The President of the Senate Lt. Gov Denny Heck conferred with his staff for several minutes before denying Sen Billig’s objection.

This link starts the session at 2:32:00 just before Sefzik is speaking and includes the interruption and the end of the Sefzik Speech.

Here is the TVW Report… 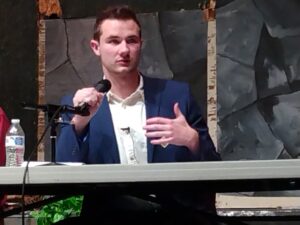 from the Whatcom County Council to Rep. Sharon Shewmake, the Democrat he’ll see in the November election for the seat formerly held by the late GOP Sen. Doug Ericksen.

But one of the things we spotted on his brief resume was a fairly stellar record in speech and debate, both in high school and at Patrick Henry College. He showed that off during a lengthy debate over Senate Bill 5909, which would give the Legislature more authority to rein in a governor during a state of emergency.

In arguing for amendments that would have given the bill more teeth, Sefzik riffed from Ben Franklin — “Those who would give up essential liberty, to purchase a little temporary safety, deserve neither liberty nor safety.” — to Abe Lincoln, and then left history for fantasy by invoking Darth Vader as an archetypical tyrant. Sadly, before he could bust out a breathy James Earl Jones triumphantly proclaiming, “The last remnants of the Old Republic have been swept away,” Majority Leader Andy Billig tried to have him gaveled down for impugning Gov. Jay Inslee’s character by calling him a Sith.

Lt. Gov. Denny Heck, whose wry game with the procedural rulings has become a real highlight of watching TVW, didn’t side with Billig but informally ruled Sefzik’s metaphor in bad taste.

SB5909 passed but without the amendment Sefzik was arguing for.”

Editor’s Note: This piece originally appeared in The Morning Wire, a newsletter published by the Washington State Wire.