All the attention on Sen Ericksen’s pay Made us here in the Fourth Corner Wonder about fellow Whatcom Senator Ranker and his pay out side of his part-time pay.

The Fourth Corner did some work using the Public Disclosure Commission F-1 Reports and voting records.

F-1 Report:  A personal financial statement that all elected officials must file with the Public Disclosure Commission by April 15th for the prior year. It discloses income and expense from all sources for the candidate/officeholder.

In Senator Ranker’s case these reports show the following facts:

Click Here for a complete list of all the source documents from the PDC. NOTE: Their are 25 Pages click on bottom of page to go to next page.

If you click on the Company (Meridian Institute)or (Ocean Foundation)  you will see they are nonprofit “Environmental” sites or  “Climate Change caused by human sites”. . Senator Ranker is consulting with these environmental industrial complex clients.  His job as a Senator is to make policy and legislation for all of Washington State.  He serves on the Senate Energy, Environment & Telecommunications Committee… Is there a conflict of interest? You decide.

Per Diem and work:

Each Senator receives ($120.00 per day) to be away from home during session.

In this session Senator Ranker has received the Maximum (84 days–7 Days a week)  through the end of March.

In this session  Senator Ericksen has received (49 days— using a 7 Day a week formula) through the end of March.

It seems Senator Ericksen is not charging the state for time in his other duties. But what about Senator Ranker?

Senator Ranker is putting on “Campaign Rallies called Hope and Action” in his district; in the 42nd district; and even in Seattle. 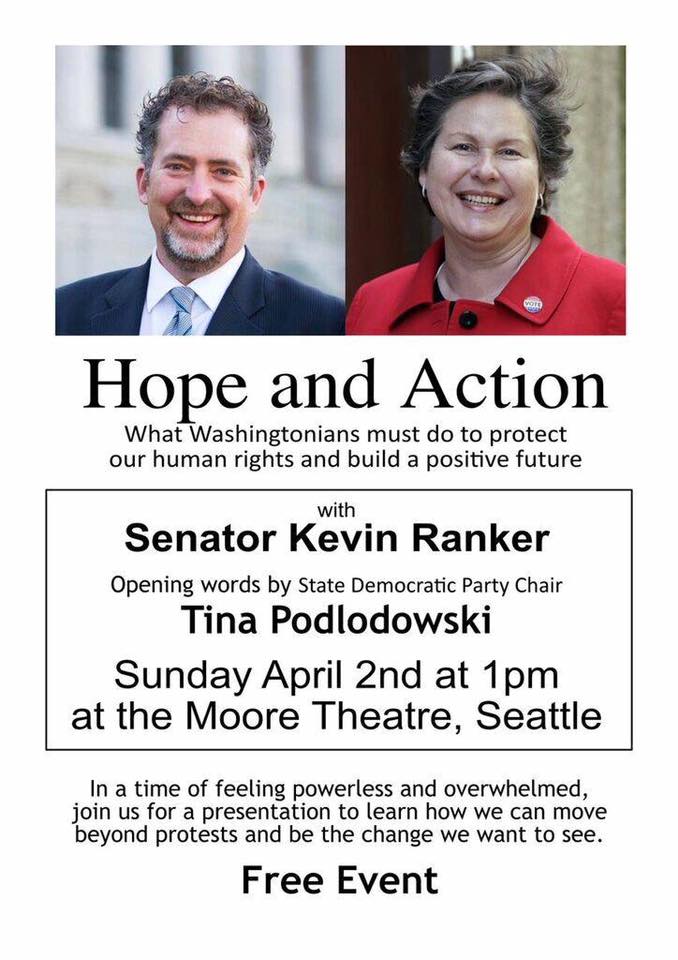 On March 19th Senator Ranker appeared in Bellingham in a “Hope and Action” event at the Mt Baker Theater (in the 42nd District) Sponsored by the Lummi Tribe and 40th District Democrats among others.

On February 19th Another Hope and Action event , on Orcas Island paid for by the 40th District Democrats.

On April 2nd Senator Ranker appeared in Seattle at another “Hope and Action” event expenses covered by his Campaign funds.

Should he be collecting per diem from the State Senate for these campaign events?  You decide.  You won’t hear the Seattle Times ask that question.