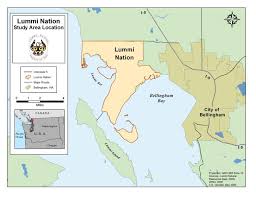 Lummi Nation has added to their holding with Trust Lands purchase at the Slater Road and I-5 Crossroads.

Meanwhile this leader and others of the tribe want all other County residents and other non tribal members to pay their gas tax on Tribal land. Why?  The tribes receive a 75% refund on State Gas Tax.

Even though the tribes get a 75% refund from State Coffers of all Gas Tax collected in their nations; “Lummi Nation aka Lummi Indian Business Council” has been awarded a $586,000 Grant by the Washington State Department of Transportation to “Sustain Lummi Transit Operations”  Really??!! Grant from WSDOT listed here.

20 of the State’s Tribes have a 75/25 agreement with the State in place for collection of Gas Taxes on their Lands.    Washington State/Tribal Gas Tax Agreement here. (Scroll arrows at the bottom for the 4 pages).    This means they collect and pay all of the gas tax received from Gas Sales and file and pay the full amount of the tax to the State Department of Revenue.  The agreement continues and the Department of Revenue writes checks to each tribe for 75% of the total collected.  In 2015 the latest year available the Department of Revenue paid $35,000,000 to twenty tribes in money that would normally be earmarked for Road Maintenance and other projects within the state of Washington; Including Tribal Roads

Why didn’t the tribe use its 75% portion to “Substain Lummi Transit Operations”.  The Fourth Corner will be asking the Tribe for their budget and transcripts of meeting where they have allocated (spent) the gas tax refund and these Grant dollars.  We are hopeful the Tribe will conform to the Washington State Public Records Act as all other entities that govern in the State of Washington must.  According to this article the tribes may not have to disclose their tribal meetings where this type of item is discussed. Arrows to scroll the six pages at bottom.

Thanks  to The author of the Whatcom Excavator for this tip.