First Hirst; Now Education; what will you pay for McCleary Decision?

Hirst and McCleary Court Decisions take Billions of Dollars in Tax and spending decisions out of the Legislature’s hands.

How much will you pay (or save) on education taxes when the dust settles?

The Hirst decision (stopping prior development plans in  Washington State) has devalued vast tracts of land throughout Washington.  We reported on it here.  The court, in effect, Reallocated property tax collections in a multi billion dollar land grab not seen in Washington since statehood.

Hirst Update: I am told that on the last night (June 30th) The State legislature was deadlocked on fixing the Hirst Decision in a battle between Indian Tribes and their Democrat friends who blocked bringing the fix to the floor of the house.

Education and the “McCleary Decision”

Meanwhile the State Supreme Court’s McCleary Decision in 2012 has forced the legislature to refocus its priorities back from what the Democratic Party control of the legislature had effectively done: made education a lesser priority as part of the budget throughout the 1990’s and early 2000’s.

To resolve the Supreme Court McCleary decision  The Republican (Majority Caucus with one democrat) in the Senate has been adding massive spending to education each year and been able to do it without raising taxes. In the meantime these actions have returned education to a higher priority by increasing the percentage of state funding for education.

This year the Majority in the Senate thought it time to solve the funding problems created by the “Decision”… they came up with a proposal for “levy swapping”.  In an attempt to make education equal throughout the state… In 2019 Local levies will be limited to $1.50 a thousand of property valuation.  The spreadsheet here shows what the current levy rate is for districts in Whatcom County.

In exchange for what turns out to be a lowering of taxes in a vast majority of School Districts; the State tax on property will increase next year by $.81 cents per thousand of valuation in 2018.

Confusion on the financial effect of Levy Swap… at first:

There has been a great deal of confusion on what the property tax rates will be in the the years from 2019 to 2021 and beyond with the legislature producing spreadsheets that showed a minimal effect on reducing taxes.

The Fourth Corner has obtained the latest information from legislative sources on the tax rates into the future and produced information for each school district in Whatcom County. You can see the predicted savings here. 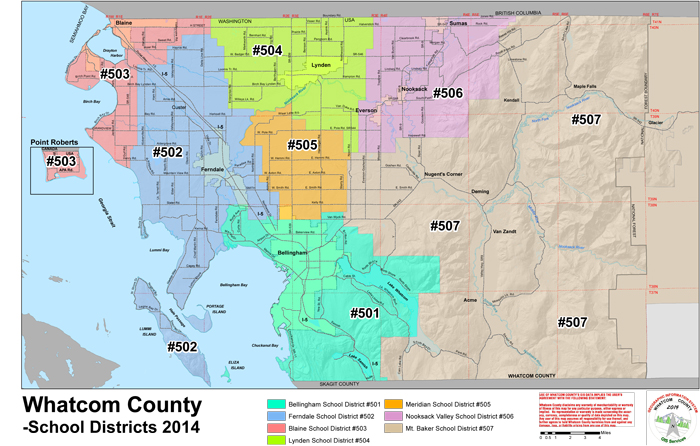 Teacher’ Unions OK with some parts but still dissatisfied with Pay.

This from local Union Representatives:

“Districts get the same amount of money no matter who they have on the payroll.”  Districts will tend to hire younger less experienced teachers.  Further analysis is needed.

And this surprising admission-“What money we have to bargain remains to be seen.  Legislative intent seems to limit the amount we can bargain to the amount they specifically fund.”  Again the Union claims further analysis is needed.

The state legislature seems to have taken care of the concerns of the Supreme Court and its McCleary decision.  Most if not all of the funding will now come from State Coffers and the property tax to support education will be a level playing field for all 294 school districts.

294 school districts will not have to allocate resources for the purpose of bargaining Health Care Benefits locally.

Each district will have up to $1.50 per thousand to take care of things such as Sports and Technology not addressed in the State Solution.

Capital Improvement Bonds and New Construction Bonds remain collected at the local level in this model.

Of course the legislature can change this model at any time but it looks like tax relief for MOST districts is close at hand thru 2021.

The definition of “fully funding basic education” under the Paramount Duty clause of the State Constitution will always be debated. Depending on whether you are a taxpayer, a union representative or a parent you will have a different view.