In a vote counter to the Republican/Democrat  vote in the 42nd the so called Kid’s initiative was turned back by a 56% to 44% NO vote.  The NO vote in the 42nd was more than the Democrat Senate race Candidate: Sharon Shewmake by about 6000 votes!  Generally its Democrats associated with the policies of higher taxes and also voting for regressive taxes like the property tax.

See the map at the bottom of the page…

In Whatcom County the Initiative was behind until the very last day when “rehab ballots” were turned in a passed through the Certification process on November 29th. The ending count was 20 votes to the Yes side.

The Yes vote campaign spent nearly 250,000 to pass the initiative which will now raise over 10 Million Dollars a year for unspecified use for unspecified children in the community.  The major donors were a Washington DC organization called Children’s Funding ACCELERATOR gave $75,000 and a local NGO called CHUCKANUT HEALTH FOUNDATION gave nearly $65,000.  Other local big givers were Peace Health for $25,000; Whatcom Community Foundation $5,000; Lydia Place for $5,000.  And three other individuals who gave $5,000 each.

Information on the Children’s Funding Accelerator is here

Information on the Chuckanut Health Foundation is here.

Information on the passed initiative  is here

The Con Side had zero Dollars to get their side out but did raise concerns about possible voting “rehab” following the unexpected result in the Race.

John Marshall of the Con Committee to Prop 5 Writes:

“Is the passing of Prop 5 a Genuine reflection of the Will  of the People of Whatcom County? Opinion

The Certification of the Whatcom County November 8th election on Tuesday November 29th was done despite opposition from the public who questioned a last-minute surge of votes that came in reportedly though the use of ballot ‘curing’ by the “Yes for Whatcom Kids,” campaign. The passage of the Prop 5 tax levy will result in at least

$82 million dollars of taxes being collected from Whatcom County residents over the next 10 years.

What is ballot curing? Ballot ‘curing’ is a process used to find the registered voters of the rejected ballots, fix the cause for the rejection, present the cured ballot for acceptance to the Auditor’s office, and then added to the count. The “Yes for Whatcom Kids,” campaign surveyed the voters who had rejected ballots on how they voted for Prop 5. If the voter recalled a Yes vote on Prop 5, the voter was then informed that their ballot had been rejected and offered an opportunity to have their ballot accepted and counted. These voters were only informed about their rejected ballot if they answered affirmatively that they had voted for Prop 5.

Observers witnessed on Monday, November 28th, people turning in large piles of letters and ballots to the Whatcom County Auditor’s office. It is unclear how many of these ballots were accepted and added to the vote outcome on November 28th.

I questioned a “Yes for Prop 5,” campaign affiliate about whether, or not, the campaign had used any of their $221,104.32 in campaign contributions to pay for teams of ‘vote-curers.’ This financial leverage was used to drown out the voice of those whose opinions are not backed by large financial resources.

A short history. The “Prop 5,” tax levy did not gather the required number of signatures to qualify for the initiative to be placed on the ballot initially. Subsequently, the Whatcom County Council, used the indirect initiative process to have it placed on the 2022 General Election ballot. Therefore, even before the November 2022 election, there were serious concerns about popular support for the Prop 5 tax

levy. How much confidence do we have that this flip in votes represented the will of the people? Many of the large contributors to this initiative will benefit financially from the outcome of the Prop 5 tax levy; a few thousand dollars contributed now will reap a much larger financial benefit to them in the 10 years that these additional tax dollars are collected and redistributed to them through grants and subsidized childcare for their services.

Voter apathy is on the rise due to a lack of confidence in the integrity of our election process and an abject lack of interest on the part of the Whatcom County Auditor and Canvassing Board in running transparent, fair, and equitable elections. Local campaigns, whether legal or not, are using unethical practices that disenfranchise many voters thus destroying confidence in our election process.

How can voters regain confidence and best ensure there is one vote for each person? How do we best facilitate this to happen? Do we need an in-depth public debate on this topic?

One idea would be to keep ballot status confidential for all but the voter. This would eliminate the ability to ‘cure’ ballots. Another idea is to return to in person voting with voter ID. This could eliminate/reduce the problem of ballot rejection due to missing or mismatched signatures, or other errors. Restoring same day elections, rather than a five week long election process would eliminate questionable late ballot deliveries. Thus, a decentralized system with in-person voting, along with a limited period, would increase the integrity of the election, restore voter confidence, and increase participation.

Let us promise to restore election integrity for everyone by carefully reviewing and working hard to restore the current election process. Voting is a cherished civil right that I do not take lightly, and I trust that you feel the same way.

Thank you for your consideration, John Marshall

The following is a map of the “NO” vote in the 42nd District in November 2022…  Preceded by a color coded key representing the percentage in each precinct who voted NO. 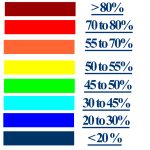 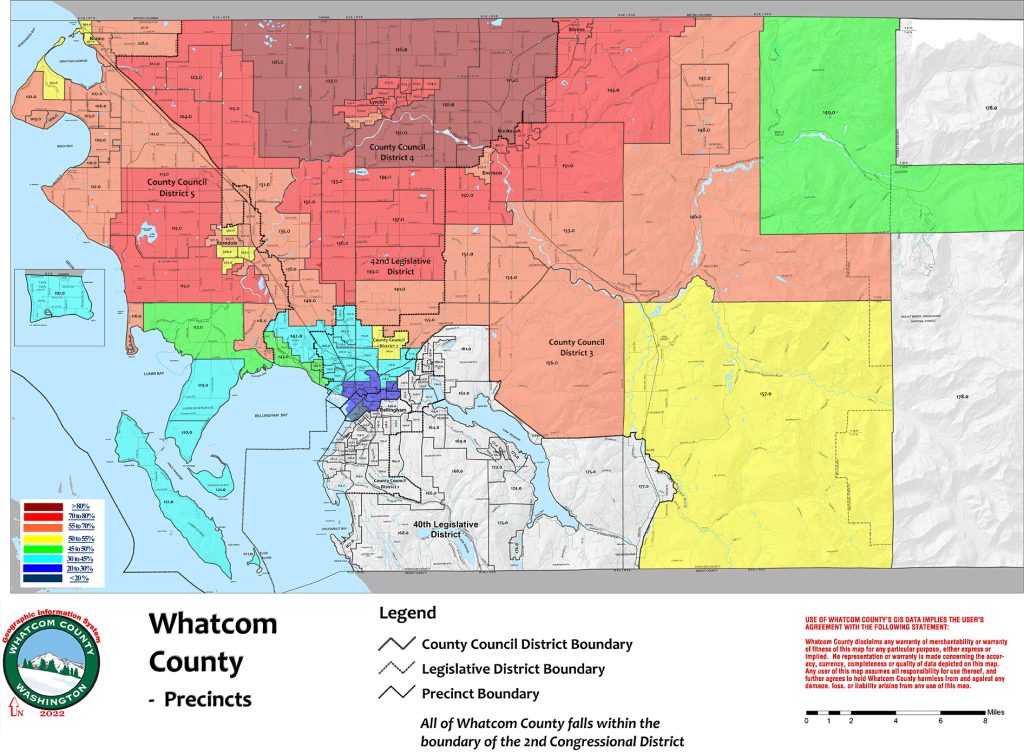