This Tuesday May 18th 2021 the Council Council agenda includes this agenda item:

AB2021-227: Ordinance imposing an interim moratorium on the acceptance and processing of applications and permits for new or expanded facilities in the Cherry Point urban growth area, the primary purpose of which would be the shipment of unrefined fossil fuels not to be processed at Cherry Point 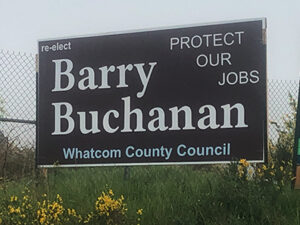 This ordinance is a continuation of the liberal majority’s  government by moratorium.  We have lost track of the number of 6 month moratoriums this council has passed to stop any discussion of expansion of jobs at Cherry Point. Our last count was at least 7 of these have been passed.  As we have said before this is a government in disarray pushed by their myopic view on the environment.  Their attempts to control the interstate process has indeed kept one of the company’s there from building clean energy projects.

Ironically Councilman Barry Buchanan has begun his campaign for reelection and has already put campaign signs up around the county intimating that he will protect jobs… He has voted to continue the moratorium in the past.

From our article in December 2019:

“Illegal use of the emergency aspect of the Moratorium process and State Law:

Other links to Moratorium Articles: