The Passing of Senator Bob Dole 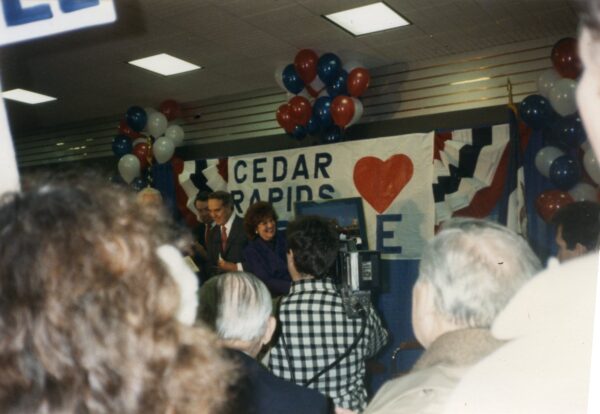 The Legacy of Robert Dole

As many of you already know, former congressman and presidential aspirant, Robert Dole, recently passed on at the age of 98.  A wounded veteran of World War II, he was a strong Republican from the State of Kansas, serving in both houses of the U.S. Congress. Here is a photo my dad took of Robert Dole and his charming wife, Elizabeth when they stopped in at the Cedar Rapids, Iowa Airport in the early 1980’s during his presidential campaign.

Robert Dole’s life was built upon sacrifice, survival, and perseverance. After accepting his permanent handicap he sustained from  military service, Robert Dole moved on and continued to demonstrate his love of country by seeking a seat in both the House of Representatives and the Senate representing Kansas and later campaigning for the American presidency.  His wife Elizabeth was a strong supporter who, herself headed the American Red Cross, serving in the federal  government as a U.S. Senator from North Carolina, Secretary of Transportation under Ronald Reagan and Secretary of Labor under President H.W. Bush.  All Americans,  can be proud of the contributions these two have made to this country, both fighting for our republic.

Currently, so many veterans, men and woman, now seek to represent their constituencies throughout the United States in the coming midterm election of 2022.  Many have survived war injuries like Robert Dole. Yes, they sacrificed and survived Iraq and Afghanistan, but now persevere to fight for those American values, the ones they had when they took an oath when they enlisted for military service.  They all want to make a difference and bring back the American Dream. Don’t we deserve it?

Robert Dole, may you rest in peace, knowing that these veterans are following the path you blazed for them and the American people, a path leading all of us toward freedom and restoring our constitutional rights in 2022 and beyond.

By Gerald Hulbert of Sumas…

Gerald Hulbert: I am a retired Customs Agriculture Officer and veteran of Navy, Air Guard, and Air Force Reserves (1969-1994). I have worked on several campaigns. I have lived here in Sumas since 1993.