City of Blaine: Small Towns letter to state officials “might not represent the best solution”

Some of our council members felt very strongly that this letter might not represent the best solution.

WHATCOM COUNTY, Wash. — Some small city mayors in Whatcom County sent the following letter to the heads of 4 state agencies asking them to implement water management solutions addressing floods, drought and other problems that they say have damaged their communities in the past year.

Re: Water Management concerns in the Nooksack Basin

We represent many of the citizens in Whatcom County most affected by the recent disasters related to the Nooksack River.

We are writing because we are concerned that the attention of your agencies is focused on other
priorities and issues of concern to you, while the crisis we face with water management in the
Nooksack River basin goes virtually unnoticed.

Weather extremes over the past year have brought triple devastation to our local communities here in Whatcom County. First, the summer of 2021 brought record breaking heat that withered our farms. Berry crops were lost or damaged, and our dairy cows barely survived the brutal heat. In September our salmon were the next to be harmed, this time by low flow levels in our rivers and streams. Over 2,500 much needed salmon died in the South Fork of the Nooksack River alone, and many other streams ran dry as well. Fishtrap Creek in Lynden was nothing more than a few ponds connected by a mere trickle of water.

And finally, the devastation of twin floods in November hit. The communities of Everson, Nooksack, Sumas, Lynden, Birch Bay and Ferndale as well as the Lummi Tribe all suffered significant damage and loss. Hundreds of homes had water flowing through them which caused substantial destruction. Over 50 animals were lost in the flooding, with thousands more forced to stand in floodwaters for days without rest. Salmon were flushed from streams and left to die in farm fields. Sadly, a precious human life was lost. These losses were magnified significantly for our Canadian friends north of us. The devastation was much worse for them, and sadly it was water from our state that wreaked havoc on their farms, communities, animals and lives. The emotional toll on a great many in our community is obvious to us as we meet with our constituents.

Instead of focusing on the entirely predictable twin problems of too much water in the river and streams at one time of the year, and too little at other times, your agencies have focused on issues that will do little to nothing to protect our salmon runs, protect water for our farms and citizens and protect our communities against these recurring low instream flows and devastating floods. Your attention is all the more urgent because we are informed by experts that climate change is virtually certain to make these twin problems even worse.

We must ask you: Does focusing on questions on who has the right to the water make sense in responding to this crisis? Does spending potentially decades and multiple millions of dollars on litigation regarding water rights make sense in the light of these twin problems and the growing crisis? Does taking away thousands of acres of productive farmland and the lives and livelihoods of our farm families, employees and suppliers make sense, especially when state scientists themselves show that massive, inflexible stream buffers are not the issue when it comes to salmon recovery?

We fully understand that there are many voices across the state, mostly in our larger cities, that demand your attention. But we call on you to hear us, meet with us, listen to our concerns and reconsider your priorities. It is clear to us that solutions, such as the storage used effectively on other river systems like the Skagit and the Yakima, are needed to resolve the problem of too much and too little water. But it will not be possible for any potential solutions to be implemented without your involvement and help.

We urge you to shift your focus to the crisis at hand and help those of us who are committed to protecting the environment, fish, farms and the families who depend on us. 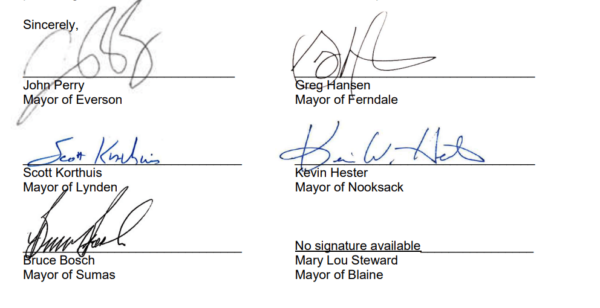 WHATCOM COUNTY, Wash. — City of Blaine Mayor Mary Lou Steward’s signature was missing from the North Whatcom County Small Cities Caucus letter to 4 state agencies with “No signature available” in its place in the signature block. In the accompanying press release from the caucus, it was said, “The letter was signed by the mayors of Everson, Ferndale, Lynden, Nooksack and Sumas,” with Blaine omitted from the list.

Mayor Steward responded via email to Whatcom News’ inquiry about the missing signature.

In her response, Steward first pointed out that given Blaine’s council-manager form of government, the city manager would have represented the city on such a letter, but the caucus preferred to have the mayor sign.

As such, I did reach out to the council for their views. The response that I got was that Blaine very much wants to be part of the best solution to solve the water management problems. We realize that, even though we were not badly affected by this particular storm, we may be the next time and that it is important that we support our fellow communities. Some of our council members felt very strongly that this letter might not represent the best solution.

Blaine is a very diverse population in terms of ideology and our council most definitely reflects this.