IF YOU ARE HERE FOR THE ARTICLE:

“County Council backs off on vote to change the charter.”

THIS WILL DIRECT YOU TO THE ARTICLE:

In a stunning move by the County Council — A Charter Amendment will be proposed to reverse a vote of the people in 2015.

The Council will propose to do away with their “fair and equal voting” stand in 2015 and return to an At-Large Voting System for All Council Members.  At-Large voting is a trend most juristictions are moving away from… The City of Seattle in 2013 and a Court Ordered move away from at-large in Yakima 2 years ago.  This just shows that this County Council does not represent you or a majority of the people in Whatcom County who voted for “District Only Voting”.

The Council makes a spurious claim that each “district only” council member represents 20% of the county and have power to vote on taxes for 100% of the County… When in reality each representative in State Government represents just over 1% of the State and Senators represent 2%… Yet all have the Vote on policy for 100% of the state.  The Council wants to turn the Representative Republic concept on its head for their own continuation of power.

This is no more than a power grab by the progressive Council… since from the recent election they found that votes did not go their way in 3 out of 5 districts.  These districts were even drawn in the backroom at their  request in 2015.  Remember Democrat/Progressive Councilman Todd Donovan submitted maps to the Council and the Democrats and Republicans drew Council lines using this as a model.


The full proposal with the “One Party” Rule now on the Council can be seen here. 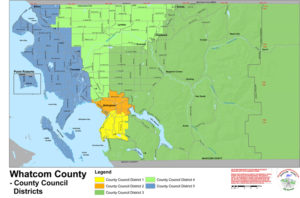 Attend the meeting tomorrow if you can November 21st at the County Courthouse.  Ten years ago the Council did not allow debate when this happened but witnesses are needed.