A veto referendum is a referendum by the people, in this case Referendum 88, to overturn (reject) an Initiative that was approved by the legislature in April 2019.

The process of passing Initiative 1000

The initiative, with the help of signature gatherers, collected enough signatures to make it an initiative to the legislature in 2019. 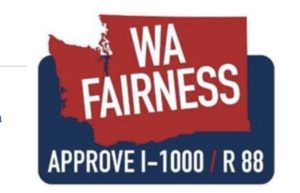 Washington I-200 appeared on the ballot as an Initiative to the Legislature for the election on November 3, 1998. Voters approved I-200 in a vote of 58.22% to 41.78%. I-200 prohibited public institutions from discriminating or granting preferential treatment based on race, sex, color, ethnicity or national origin in the areas of public education, public employment, and public contracting.[14][15]

The Washington Supreme Court interpreted I-200 as prohibiting “reverse discrimination where race or gender is used by government to select a less qualified applicant over a more qualified applicant.” The Washington Attorney General Bob Ferguson issued an opinion in 2017 stating, “I-200 does not prohibit all race- and sex-conscious measures. Rather, it prohibits only measures that have the effect of elevating less qualified contractors over more qualified contractors.”[16]

Community groups put together a Referendum (88) to Veto the reinstitution of what they consider “unfair affirmative action” laws and the repeal of the 1998 Initiative 200. The groups got enough signatures to get the Veto Referendum on the ballot on November 5th 2019.

Now voters have an option of returning to Initiative 200 law or segregating individuals based on race, sexual orientation, groups they belong to and other “special” discrimination practices for certain jobs, schools etc defined by government.

The result of your vote:

An upfront thank you to “Ballotpedia” for their information on this report.